Get into the Oktoberfest mood!

Now, before we begin, I must admit that I only very recently learned that Oktoberfest, despite its name, is actually celebrated mostly through September, and only for the first week of October. The main reason for this, was that while it originally did occur in October, it began to be moved forward to take advantage of the nicer weather during September. Of course, to learn this, I also learned a lot more about Oktoberfest, or as the locals call it, wiesn. So, if that previous fact intrigued you, here are some more facts to really get you into the Oktoberfest mood for that final week! (Of course, if you still want to stick to your guns and hold a German-themed event in October, don’t let me stop you!)

In fact, beer wasn’t served at Oktoberfest celebrations until 1892, 82 years after the first Oktoberfest ever. Originally, it was held as a way to celebrate the wedding between King Ludwig I and Princess Therese of Saxe-Hildburghausen. The celebrations became an annual affair, including attractions such as horse races and other carnival booths and games, and to show off the agriculture. It was a public festival, with parades and the whole works, to celebrate this glorious wedding. While originally held in October, it began to be moved further forward so that the warmer September nights can be enjoyed. Nowadays, Oktoberfest generally take place from the 2nd week of September to the end of the 1st week of October.

2. The locals call it Wiesn.

It is short for Theresienwiese, which is the name of the grounds on which the original wedding, and now the annual celebration, takes place. It was named for the bride, Princess Therese. Just like the whole “holding it in September but calling it Oktoberfest” deal, the colloquial and local term doesn’t include any hint of what it is all originally about. But then again, most cultural colloquialisms don’t!

3. More chickens are consumed than bratwursts!

Nearly half a million roast chickens are eaten, compared to only about 100,000 pairs of pork sausages. To be quite fair, it’s much more fun to say the words “bratwurst” when you’re drunk. 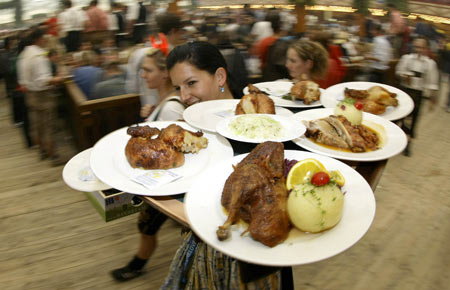 4. The beer served at Oktoberfest is a special, stronger brew.

Speaking of getting quite drunk, the beers are very specially brewed for Oktoberfest! There are a select few brewers who make a special recipe beer that is 1.3% stronger than your average beer. Add onto that the fact that every time you buy a beer it’s at a whopping litre stein (or one mass), and you’ve got yourself a recipe for drunkenness!

5. There are many helpers and doctors on site, and a LOT of toilets!

As you can imagine, many people find themselves needing a bit more than just a lie down. The Red Cross tent onsite is usually very full, and after a toilet queue debacle of 2004, where the police had to step in to regulate access to the toilets, Oktoberfest has dramatically increased the number of toilets, and today there are around 1,800 toilets available. And they’re probably quite frequently used, too!

6. Apart from the beer tents, there are also tents for phone calls, lost property, and lost children.

Oktoberfest is a very family friendly event! After all, it’s a festival celebration. Children are completely allowed to attend, and in fact, there are many rides for the children as well! Sometimes, in the crowd, some children go for walkabouts, so luckily there is a place to find them should they go missing. Your property, on the other hand, such as passports, mobile phones…false teeth and weddings rings…they may not turn up as easily. You can always go through the lost property tent, however!

7. Oktoberfest has been cancelled quite a few times.

Because of cholera and war, mostly. Altogether, Oktoberfest had not been celebrated 24 times.

8. Oktoberfest is great for the economy, but it’s still a mostly local affair.

As you can imagine, what with there being almost one mass of beer drank by each attendant, not to mention all the food and attractions, Oktoberfest is a great boost for the economy. However, it’s not as packed with tourists as you think: only 19% of visitors are actually from outside of Germany.

Now that you’ve gotten some interesting facts about the Munich Oktoberfest, are you getting excited for your own, private one? We love any occasion to dress up in costume and put on a show, so you can imagine, of course, that we have many German-themed entertainment. If you’re not so sure about holding your own Oktoberfest (yeah, I can imagine that the clean up might not be appealing), there are also many Oktoberfest events happening around you. Check them out, and get into the festivities!